Cattle Egrets Next to Stuff

Basically - here's the deal. Cattle Egrets, Bubulcus ibis, are reknowned for following large mammals and feasting on the stuff they disturb. Traditionally it is cattle (hence the name) but it can be other stuff.....like this White Rhino. 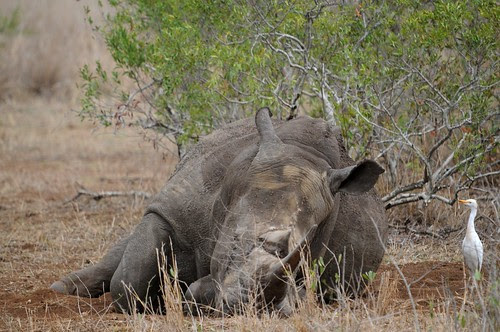 Being crafty opportunistic little rascals, they'll follow pretty much anything and anything be it a common or garden field cow or one of the world's rarest mammal or even some dude on a tractor. Being crafty and opportunistic they've also managed to extend themselves around the world onto every continent and into all sorts of situations. I've seen (and photographed) them next to all sorts of weird creatures and items (including a mobile bbq chicken truck) and I reckon you may have too.....So I'm planning on starting a new blog to which all can contribute: Cattle Egrets next to stuff.

If you have a photo of a cattle egret stood next to, following, riding or chillaxing in the general vicinity of either an animal, person or bit of machinery either email it to p dot taihaku at gmail.com or tweet me @twaihaku and we'll get this thing up and running.

They don't have to be amazing shots and I'll of course give you credit and a link back to your blog or twitter if you have one. I'd also appreciate a little background (what it's doing, where it's doing it)

The results, no doubt, will be fun.
We have no cattle egrets in Dorset but we do have the little variety.

That sounds like a great idea and I can't wait to see all of the pictures. Unfortunately, we have no cattle in my neck of the woods. We do have herons, pelicans and osprey though lol

They are well socialized, having been raised in our home as members of our
own family in order for them to become ready to be a member of yours.
They are quite comfortable around all ages, including the elderly and young children.
When you purchase a bird from Us, we are committed to offering lifetime support and guidance to you and your family.

Hand Raised Parrots for Sale, Macaw Parrots for Sale
Macaws are playful and active and they have excited personalities to go along with their sizes.
But this also makes them very challenging pets. They do have the ability to say words and mimic
our speech but it is not as clear as some other pet bird species.
Because they are so intelligent, macaws can be trained. You can start when your pet bird is young,
and work on hand-feeding, teaching your bird to talk or sing, and training your macaw not to nip, bite, or scream.
Text or call +1(512) 643-7439

macaw for sale near me