Objectively my best bird of 2010 was the self-found spoonbill which I turned up on 1 May. I blogged about it at the time and can't really offer much more on it but it falls slightly short of being my actual best bird because of circumstances and the fact that "bests" are inevitably subjective. Last year three snowy owls had turned up here on a tiny island about a thousand miles from sensible snowy territory and realistically two small or one rather big sea crossing away. I dipped by virtue of not being here but in February this year the owl showed up again, a year after its first appearance on the same outcrop of rock, a tiny subisland accessible only at low tide by a submerging causeway.

My parents visited and so the three of us set off to try and twitch the bird. I'm not convinced my parents thought we'd see it. I thought our chances were mixed but it was a nice walk in any event. Here's what happened next in the words of the original blog post.

We drove to the causeway and waited for the tide to complete its drop whereupon a causeway was revealed (I'm not sure it would be overselling the awesomeness of this to describe it as a moses-style parting of the waves). We (and a number of other birders) wandered across and promptly began wandering the islet periodically staring at white blobs which revealed themselves to be herring gulls. Hope was beginning to fade (again) when I spotted someone crouching behind a rock pointing some optics at something.....and by something I mean this: 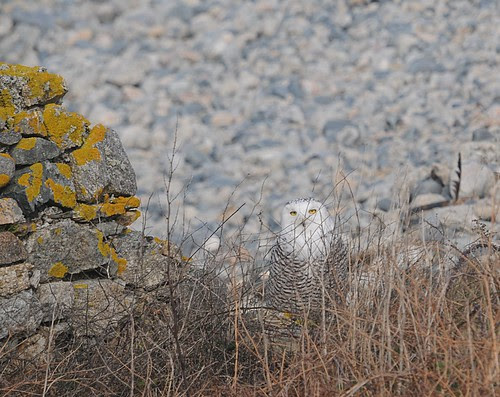 In the immortal words of Alan Partridge: "back of the net!" We watched her for about 25 minutes (before the tide turned). Periodically the gulls would work out where she was and give her a bit of a beating up whereupon she'd spread those great wings and fly to somewhere a little more scenic. Like this: 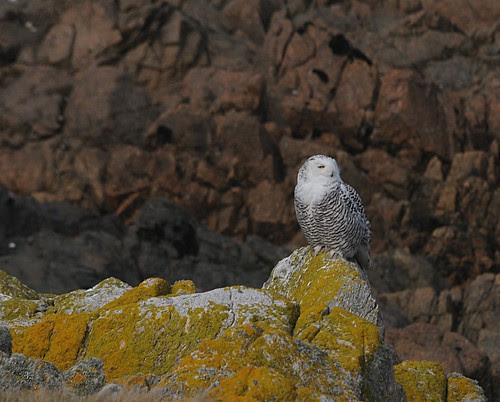 This could not have been a more perfect birding experience. It would take a cold heart not to be won over by those huge yellow eyes. 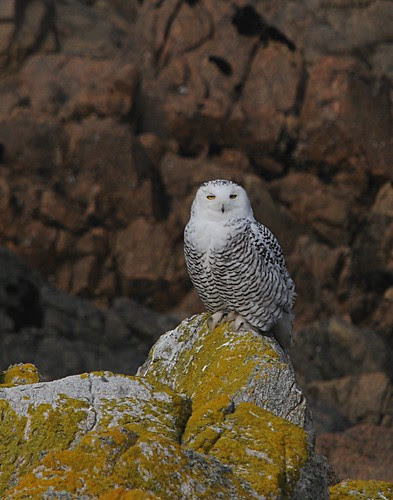 They seemed to spend most of their time focused on the gulls issuing a glare that said "it will be dark soon and I will eat one of you irritating little so and so's". I think most birders will have probably come across a captive snowy (or eagle or great horned) owl before they get their first look at a wild one so I was surprised that I was surprised by the scale of the thing. But I was - this is a big bird and it needs to be seen in the landscape as opposed to in a zoo or falconry centre to truly appreciate just how big. 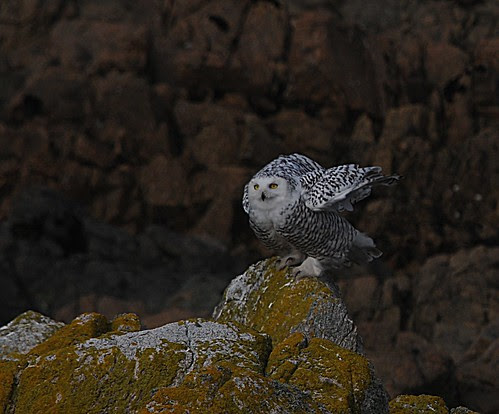 Also check out the feet. I mean the feet are just awesome.

So why was this the best bird of 2010? Well:
a) Just look at it;
b) It was awesome to get a bird this rare back after missing it the year before;
c) it was a great experience to be able to see this with my parents who being primarily birders of the robin-stroking backgarden sort were suitably blown away by this (and the conjuring trick I did immediately after to produce breeding marsh harriers displaying within seconds of looking for them went down pretty well too);
d) the feet really are awesome;
e) a twitch where you literally walk through a parting of the waves old-testament stylee? come on. That is legend-waitforit-dary. Legendary.

Awesome bird and best bird of the year for sure. I am sooooo jealous!

They are amazing birds, and incredibly I've yet to see one up here where they breed. Sigh.