Doe; a deer, a female deer/baby got buck

A mash-up of deer/song lyric puns if you will, in honour of a post on Axis deer. 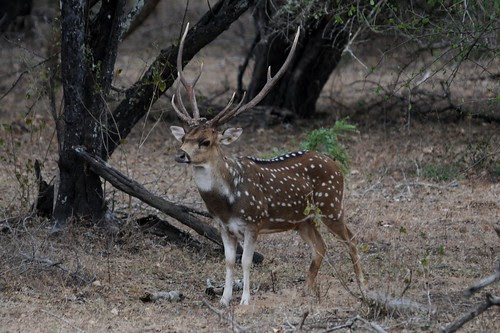 This beautiful axis stag is a sri lankan one and hence belongs to the subspecies Axis axis ceylonensis but Axis deer, also known as Chital or spotted deer, can be found all over the place. Native to Sri Lanka, India, Nepal and their immediate surroundings, the pretty bambi like appearance of the Axis together with their meat and international desire for hunting trophy species has led to transplant herds in places as diverse as Australia, Texas and Uruguay. Its not unusual to see small herds in deer parks, safari parks or zoos either. Those deer in Australia lead a pretty charmed life compared with the native herds which are prey to Leopard, Tiger and Asiatic lion amongst others. As a result of this pressure, the deer often forage with grey langur monkeys (of which more later) with the combined group benefiting from the differing senses of both species. 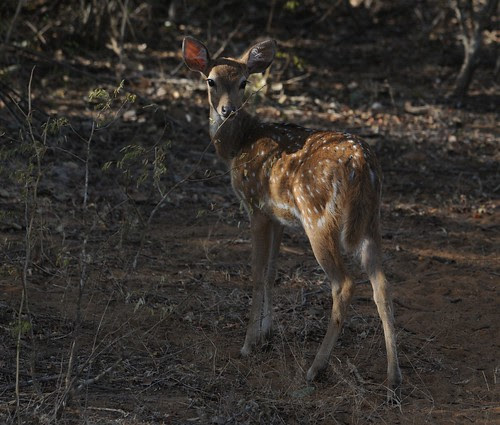 I must confess to sometimes being a little indifferent to deer. They tend towards unwildness in my own experience; tame fallow deer by the roadside, roebuck moving through the cornfields without caution, denatured by a lack of predation. Sri Lanka's Axis, like most truly wild deer, live a life under pressure. They will tolerate you with watchful eyes, sinews trembling, ready to run. In that nervous yet confident stillness, true grace and true wildness can be seen and indifference is impossible.
Posted by tai haku at 2:38 PM