So having bagged a beautiful snowy egret to get the island list up to 90 early in the day on 18 October I then narrowly avoided writing off my car on our treacherous roads, fitted two replacement tyres and headed to the salt pond in the hope of cutting my needed ticks to single figures. After working my way through some common waders I was rewarded with a telltale black tail swimming into the mangroves - a coot! Now although I totally forgot to mention it in my roadmap to listing immortality, a close look at a coot would be a really good opportunity to increase, or at least cement the numbers on, the list. You see caribbean coot sits at number 33 on my list and I've seen a lot of coots here - including some really big numbers of birds during the bird counts. Unfortunately, without exception til now, they had been seen from a huge distance through the scope. I'd always assumed the birds I'd seen were Caribbean coot as I hadn't been able to make out the telltale red head marking so had assumed the telltale red marking wasn't there and they must be Caribbean coots. Both species are seen here so a close look if this bird left the mangroves would give me a real shot at at the very least confirming I had the right species on the list or better yet adding a new species. I waited.......and waited. I should perhaps have said I was calf deep in the salt pond at this point as I waited. Things were beginning to eat me. There were lots of cooty flapping noises, grunts and shrieks from the mangroves. Definitely at least two birds in there - if only they'd come out - here we go; out it comes. 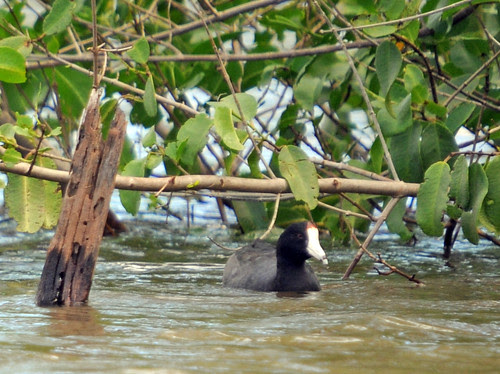 I start frantically taking record shots and looking thru my bins as best I can at the same time - red head patch = Amercian coot! American coot is on the list. I was delighted (remember every species I get at the moment - is one less annoying tiny passerine I need to find later). But then I started to feel kind of bad. I couldn't really guarantee this was different from the birds I'd previously ticked as caribbean coot - I'd just got much better looks at this one. Maybe Caribbean coot should come off the list? Welll hang on a minute....here come the other coot at which point I burst out laughing - check out the full white frontal shield on this bad boy: 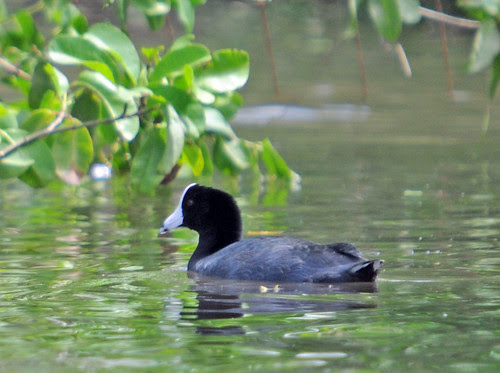 Caribbean coot is staying on the list after all! A good day's work 9 birds to go.
Posted by tai haku at 12:15 PM

Thanks Mike - I was pleased with this - I felt like a "proper birder" for the first time in a while. It is more than a little strange for me to see two such similar species occupying the same niche in the same place though.

Hi Tai, Good job! Coots are definitely abundant where and when found but you just proved that it is always a good idea to look closely at the species we are seeing or THINK we are seeing. You never know when you will see the Bohemian Waxwing in a flock of Cedars, a Collared Dove in a flock of Mourning Doves or a White-throated Sparrow in a group of White-crowns. Being careful and complete is a great attribute for any birder!