We don't have any hares, rabbits or other lagomorphs of any kind running around the island (yet) but we do still have the odd one or two of these ruddy cheeked fellows ambling about. 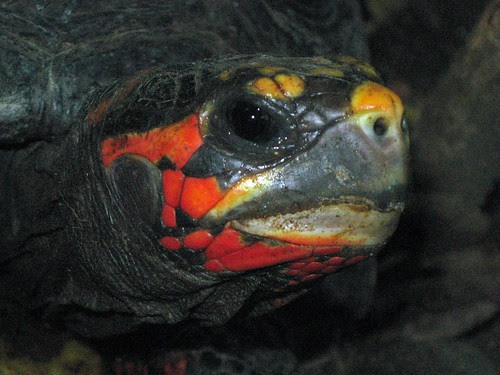 This is the red footed tortoise, Geochelone carbonaria. The history of red foots in the Caribbean is an interesting one. They are probably not originally native to the islands; their original range extends from extreme south central america through a wide swathe of south america. There are a few different regional phenotypes. oh yeah: why the red-footed tortoise? Well check it out: 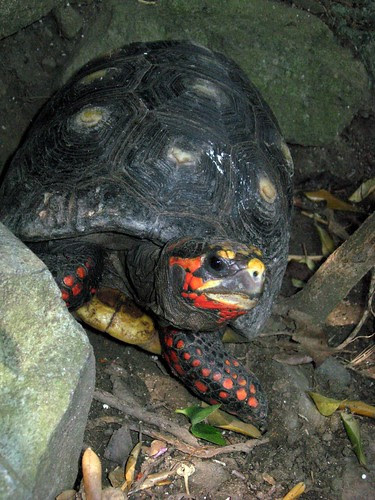 In the caribbean they have a fairly random distribution. It seems likely they arrived by ship in the 17th century and were released to provide a food supply. These are fairly large tortoises; 16 inches or so when full grown and would provide a fairly decent meal. They would also be useful from a food perspective in that they would fend for themselves and upon reaching a harvestable size they can be stored alive without food 0r water for vast periods compared to other animals. 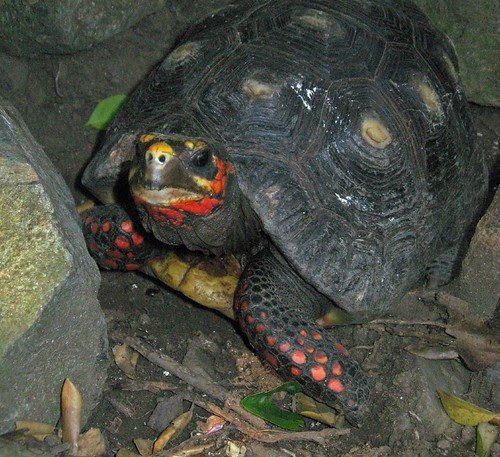 Also tortoises are classified as fish by the catholic chuch and so large numbers continue to be eaten on Fridays in South America hence an increasing risk to the species. Out here they aren't doing to well on the main islands - this one is one of two roaming an urban park in semi-captive status and I haven't seen any others. I'm sure there are a few adults wandering about somewhere though. Young tortoises are rather vulnerable; especially to feral cats, mongooses, dogs and eggs fall prey to rats. Hence the population isn't rejuvenating itself. I'm told a couple of outlying islands and cays; free from such feral nastiness are stacked with baby tortoises though; time will tell.

Lovely post I enjoyed your pictures. It would be a shame for your to lose these lovely Tortoises.