IATB: Back to the Movies

Welcome back to the I and the Bird multiplex cinema (what took you so long to return?). We've got some great new films in this fortnight. We're still offering Warbler friendly coffee and Hoopoe friendly wine in the lobby refreshments area amongst other SOLE food snacks. Here’s your ticket so once you’ve picked up your refreshments make your way through to the screens and enjoy our feature presentations. 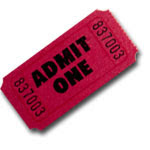 Screen 1: Soft Fruit (1999) - Soft Fruit is, appropriately enough an Aussie film and so the perfect jumping off point to visit Aussie blogger Duncan of Ben Cruachan blog who has been sharing his fruit with Pied Currawongs and Satin Bowerbirds.

Screen 2: The Darwin Adventure (1972) - an excellent docudrama of old-school birder Charles Darwin's life and adventures. As a result of the Beagle expedition Darwin saw South American Ostriches (Rhea) and Greg Laden fills us in on his observations.

Screen 4: (Double feature) Volcano! (1997) & Krakatoa, East of Java (1942) - We're showing these two because the Zen Birdfeeder (who has a cool blog name) told me there was a volcanic erruption....what? Irruption eh?...Oh. Well that does make more sense for IATB but we don't have any films for Pine Grosbeak irruption (Don't tell me you'd forgotten how bad the puns were last time?). 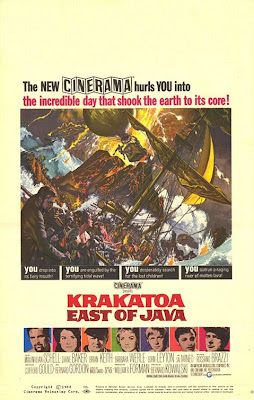 Screen 5: Life List (2005) (Documentary Short) - Of particular interest to I and the Bird cinemagoers is this 16 minute film about birding and listing. I suspect it would be of particular interest to Peter Kaestner (4th on the all time world listing table with 8100+ species). Amila lives and blogs in an endemic hotspot and hence was lucky enough to help him add Serendib Scops Owl and 6 other lifers to his list.

Screen 6: Citizen Kane (1941) - the eponymous Citizen of the title was not, to my knowledge involved in the Audubon Society's citizen science projects. The birdfreak team let us know the score on the Cerulean Warbler which, thanks to birding citizens, now has its own atlas.

Screen 7: A Bath House Beauty (1914) (Short) -Doug Boude built a bird bath for his backyard buddies which led us to show this vintage Fatty Arbuckle short (ironically one of the few "clean" films with bath in the title).

Screen 8: Predator II (1990) - In this sequel to the Arnie (ahem) classic the predator stalks a US city. Over in DC (the home of A DC Birding Blog), John spends his day watching a number of predators (and their prey) each more interesting than the prosthetic monster.

Screen 9: Shen ying fei yan hu die zhang (aka Eagle Claw vs. Butterfly Palm)(1982) (Chinese dubbed) - Back in August the Ecobirder braved the Eagle's claws to rescue an immature bald eagle. In this post read about how they got to see its triumphant return to the wild. We're putting on this Eagle claw kung fu flick in homage to their good deeds.

Screen 10: The Scarlet Letter (1995) - OK bear with me. The letter is scarlet a shade of red, however as fans of popular science books probably know, Canaries aren't red (unless you do strange things with their parentage), now none of this is particularly relevant as GrrlScientist (who like Ecobirder's eagle has a bad wing - get well soon Grrl) isn't actually blogging about real canaries. She's blogging about metaphorical ones which are actually other birds. 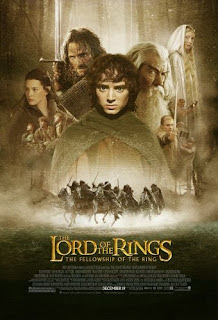 Screen 14: Saved by the Bell: Wedding in Las Vegas (1994)(TV) - Why are we showing this dire made-for-tv special at the IATB multiplex? Well partially because like all kids of my generation I'm still in love with Kelly Kapowski but principally because everyone remembers Saved by the Bell for Screech and Rick saw a rather nice screech owl.

Screen 15: Big Fish (2003) - TR (from the faraway nearby) doesn't actually mention Big Fish but considering he was birding some fish ponds I presume there may have been the odd one about.

Screen 16: Spring and Port Wine (1970) - Unlike perhaps the populace of fictional 1970's Bolton, England, Liza Lee of Egret's Nest appreciates the need for spring; she's already got Allen's Hummingbirds lurking amongst her flowering quince (nice plant btw Liza get that in for Berrygoround too).

Screen 17: Spring Fever! (1982) - The Greenbelt's Ridger is of the opinion it might be spring - she has the confused birds to prove it.

Screen 19: The Agony of Defeat (1992) (short) - N8 posts about the thrill of victory and the agony of defeat as he watches a red-tail tear up a squirrel's nest. I totally know what he means about squirrels with a sense of entitlement too.

Screen 20: Silence of the Lambs (1991) - My all time favourite movie because of not only Lecter but also Clarice Starling. Of course Starlings aren't just amazing serial killer catching FBI agents, they're the marvellous in nature.

Screen 21: Tarzan in Guatemala (1935) - Well not Tarzan exactly. Our illustrious leader Mike of 10,000 birds hit Guatemala recently, here's the first of many posts to come. The tagline to this film (aka the new adventures of Tarzan) was "The Greatest Tarzan of all Time" can Corey or Charlie confirm if he fits the bill.

Hope y'all enjoyed the show - our next feature will be at the House and other Arctic Musings so don't forget to get those trailers in on time.

Well here it is - I hope you enjoy it and its not too typo and bad-pun laden. I'm sorry I didn't get to properly thank everyone for their excellent submissions as they came in - my access wouldn't allow it.

For the record, Predator II was set in Highland Park, NJ. (I moved, but kept the old blog title.)

Oh man, Pecker is a hilarious movie... Sorry I missed this one. Brain fart.

Nice presentation...and I didn't even get sticky stuff on the bottoms of my shoes.

And, yes, I can confirm that Mike fits the bill as Tarzan. In fact, one of the first times I went birding with him he showed up wearing binoculars and a loincloth. :)

Fantastic, Tai. And Corey neglected to mention we were on a winter pelagic. The Dovekie really responded to that "king of the jungle" call!

Wonderful I and the Bird! Great concept and very entertaining!

Great show! Thanks for putting it together! Several of these are clear Academy Award nominee quality! Great job all!

Thank you! Now I have some excellent posts to read. Great job.

Freelance work, for instance, is booming right now. The so-called “gig” economy - one in which workers sell companies their labor on a per-job basis - is growing at double-digit rates.

Get best and professional environmental economics assignment help services with experts. Our assignments writing services are probably the fastest on the web. GoAssignmentHelp.com offer superior quality assignment help, with the team of highly qualified and skilled professionals. Each assignment writer with us needs to go through a specialized process of training such that they can complete the given assignment task within time by complying all the assignment need perfectly. Our team is completely dedicated to handling all kinds of assignments such as essay writing, swift programming assignment help and much more. GoAssignmentHelp.com writers are completely capable of accepting the challenge and meet it and our experts constantly improve their methods of work so, they improve the speed of execution. They know how to choose the most suitable strategy to complete this or that piece of international business assignment help writing. As a result, almost 100% of all the orders made by our clients were written before the time limit was over. You will always be on time with us.

Thank you for sharing the useful post. A reader got a lot of information from this post and utilized it in their research. I also provide independent support for the outlook email. So if you are facing issues with the outlook account then contact me for outlook email support.
Also Read: Outlook not connecting to server | Outlook send receive error | outlook cannot connect to server | outlook not receiving emails.

Wow, thanks I just got exactly what I wanted from your blog, thank you so much! You should check out our website. jamb result checking portal

Hi, I really enjoyed reading your post, and hope to read more. thank you so much for sharing this informative blog. You may also like things to say when someone dies

Reading is my passion. That’s why I become super crazy to see what new is going in your post. I want to see interact you with the navigational link of Online Assignment Help service.

A business can save a lot of money by replacing an ageing parking lot light. Although there will be an initial financial outlay to purchase equipment and the electrician's knowledge, this investment will pay for itself in the long run with cheaper running costs and increased safety capabilities in both the short and long term.
outdoor lighting chicago , commercial sign repair , Neon sign repair near me

In general, vistahermosa Costa Rica villas include all of the necessary and luxurious amenities, but you can request additional services based on your specific needs.
costa rica private villas , costa rica rentals on the beach

Thanks for sharing this amazing post. Looking for the best cheap assignment help UK just make a call to Assignments Planet for all assignment services at a cheap price.

This is a really decent site post. Not very numerous individuals would really, the way you simply did. I am truly inspired that there is such a great amount of data about this subject marketing assignment help have been revealed and you've put forth a valiant effort, with so much class. On the off chance that needed to know more about green smoke surveys, than by all methods come in and check our stuff.

Thanks for this a nice and helpful piece of information. I am satisfied that you just shared this useful information with us. Please stay us up to date. Thank you so much for sharing. Also visit fce okene diploma application form

Now, you should not worry about his purpose and last your query with us. The professional team assignment help Hongkong available with us is to provide the best solution. Now, nobody can stop you to access a better grade. To know more information, you can surf our web address.


History students at the university level must learn about everything. As a result, they want experienced assignment assistance. When students are bored with their history tasks, they look for a decent assignment aid. The only option is to seek History Assignment Help . Our history experts can assist him in completing his task to the best of his ability.