Heard but not seen

Much like the Clapper Rail I posted a while back, Mangrove Cuckoos are a very common bird here. Like the rails they are thought of primarily as wetland area birds (hence the name) but actually seem to be much more widespread across the island. In spite of this (and again like the rails) I rarely see them but do hear them fairly frequently. 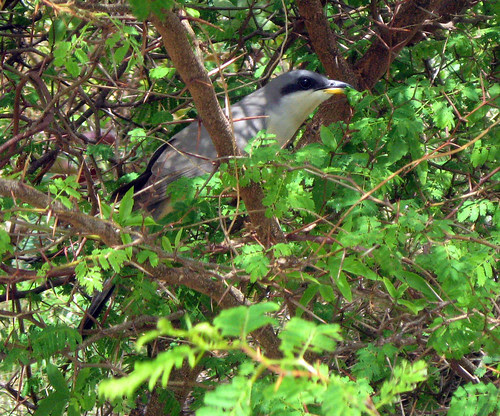 I was just dragging my kayak up the slipway and preparing to head home when he let off a deafening blast of his call right next to my ear thereby alerting me to his presence...which was nice. Unfortunately he did behave fairly true to type by staying buried deep in his chosen acacia thereby denying me a shot of his wonderful long, thin and graceful tail with its thick black and grey bands. He also retreated further into the scrub limiting me to the single shot above. Nonetheless our cuckoo showed no fear whatsoever and sat happily watching me from his safehaven. As I think the picture shows these birds have a gleam in the eye that suggests one of the more intelligent birds. He was certainly too smart to get caught on camera again.
Posted by tai haku at 11:04 PM

Nice shot of a highly coveted bird. Now I need to come visit you!

The Stokes wrote a chapter of Good Birders Don't Wear White titled "Follow These Rules To Find A Mangrove Cuckoo" which is actually a very sarcastic discussion of how impossible it is to find these birds in Florida.

cheers Mike - I think I'm still under 10 sightings of this one in over a year and I know they're everywhere cos I can hear them. My tip for seeing them would be get up early. I saw several on the CBC when I roused myself at 5:30am so I reckon that's the time to strike before they get shy.

Great picture! I bet he never expected you to capture him!