Warning: Post contains details and images of natural activity some may find "icky"....maybe come back later if you're eating.
Whilst the main attraction of the Donna Nook seal rookery is, obviously, the seals as a tidal mudflat it holds more than its share of interesting birds too and we certainly didn't neglect them. Intriguingly it was the two commonest species present that provided much of the interest in a truly remarkable moment I feel privileged to have witnessed. It all started with the noise of a baby crying; a newborn baby grey seal. I must have missed its birth by seconds but plenty of others were paying attention. The baby seal was wimpering a little pathetically and its mother seemed to be ignoring it when this huge (great black-backed) gull (Larus marinus) swooped down. Even with the perspective difference this shot really is a good size comparison of seal and gull.
As the gull advanced it looked rather menacing and the poor little seal looked really unhappy. At that point we were actually wondering if the gull might somehow try its luck for a seal lunch when mum stepped in and the gulls retreated. This magpie (Pica pica), whilst smaller, also expressed an interest. I always thought the rhyme said 4 magpies for a birth. 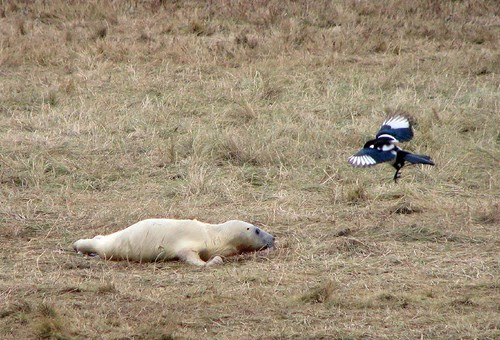 Of course the magpie wasn't interested in predating the seal, it, and the gulls, were after the afterbirth and with good reason. Placenta is very rich in nutrients to the extent that as River Cottage chef/maverick/visionary Hugh-Fearnley-Whittingstall famously taught us in many cultures human placenta is a valued food. In the cold English winter it must be an awesome food source for these birds. As soon as the mother's back was turned the juvenile GBBG was straight back in for his share. Again the size comparison is interesting. 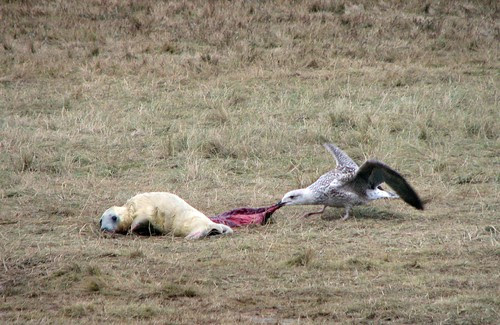 I was surprised how unmolested he was by other gulls, only a few magpies paid him any attention at all as he picked at his prize for several minutes. Unfortunately for the gull as soon as I made this observation out loud, he managed to split it open somehow and instantly this happened: 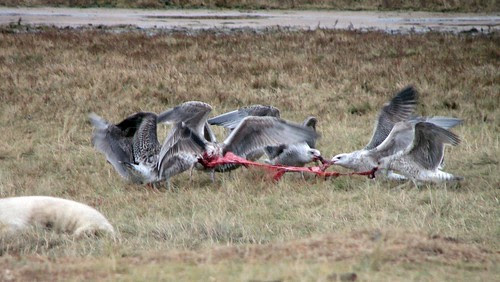 Notice how much fluffier and bigger the seal looks on the right now he's dried out? I suspect the birds' opportunism is (whilst perhaps irritating to mother and scary for baby) a good thing for the seals as it removes the afterbirth from the nursery area and presumably takes a potential disease source away.
Anyone wondering about the seal will be pleased to know he was suckling happily by the time we left.
Posted by tai haku at 11:34 PM

Thank you both - it was quite a sight!

This is realy a close up view.. Amazing pictures !

All the pictures are good.I really like them all. Thanks for sharing it.